Went in With Two, Came Out With One

The last five days for the Coffman family have been quite the whirl wind of activity and emotions.  Tuesday afternoon Dustin started to have blood in his urine, but no other symptoms.  No pain, no fever, nothing else significant. He went into urgent care and they started him on antibiotics for treatment of what we all assumed was a kidney infection. Thursday morning, Dustin woke up around  3am with pain so intense that it made him nauseous and weak.  I loaded him into the van, woke up all 5 kids and we rushed to the ER. While at the ER they ordered a CT scan to see if there was a possible kidney stone causing the pain, nausea and bloody urine. When they CT came back the Doctor came in and told us that there was no kidney stone but actually a golf ball size mass on/in Dustin's right kidney. Another full body CT with dye was ordered and Dustin was admitted and moved to a room on the third floor. While they did that, I left and ran the older two kids to school. That afternoon, Lily flew into town and came and took the little kids home from the hospital. Later that night the Doctor came in and gave us the CT results. Dustin had a malignant tumor on/in his right kidney. Thankfully, Dustin's left kidney is in perfect health and there are no other growths, tumors or abnormalities anywhere else in his body. The Doctor told us that he would be scheduling surgery to remove the Kidney as soon as possible.  Thursday night and Friday morning were very long and Dustin was not getting any relief from the pain and his urine was still bloody. Friday evening Dustin had surgery to remove his right kidney. Brian had flown in earlier in the afternoon and was able to come to the hospital, while Lily was at home with the kids, and be there with me when Dustin came out of surgery. The surgery was a success and the doctor was pleased with the results. He confirmed that there were no other abnormalities except for those regarding the right kidney, and also that the left kidney is perfectly healthy. Late Friday night Lily came down with the horrible flu bug that we had all had last week. Thankfully, Brian was able to watch the kids while Lily recovered on Saturday and while I was at the hospital with Dustin. Saturday, Dustin was still pretty rough and swollen but overall there had been a huge improvement in the pain and the blood in his urine had stopped. By Sunday the doctor had switched Dustin from IV pain medication to oral pain medicine in hopes of him being able to come home. Dustin was able to come home this morning and is doing well. He is enjoying ESPN and Percocet. Thank you for all of the prayers and good thoughts that were sent our family's way. We appreciate all of the love and support that we have received more than words can describe.
Posted by Dusty at 5:04 PM 1 comment:

Happy Birthday Miss Lillian Mae! You have been the greatest surprise of my life, and the greatest hidden blessing. You have completed our family and we love you immensely. 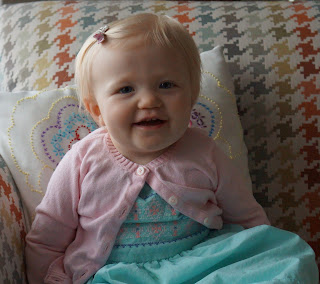 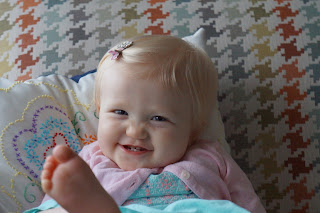 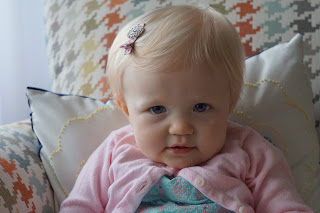 Happy 11 Month Birthday!
Hard to believe that this little Lily Bug has been with our family for almost a year! Lillian is a happy, cheerful, patient and independent little baby. She doesn't say a whole lot, but when she does she has a very adorable deep little voice. Lillian loves to clap her hands, both for herself and for others. Lillian also loves pointing, she points at all of her favorite things and people. Lillian loves Skeeter and he thinks that she is the most wonderful smelling and tasting baby ever. Lillian adores her siblings and is always thrilled anytime that they want to play with her or when Elijah carries her around on his shoulders. Lillian has added so much sunshine into our family! We are so very glad that she decided to be apart of our family, 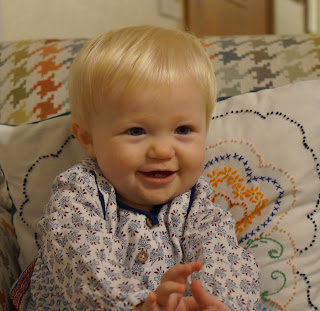 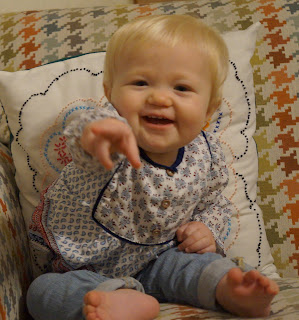 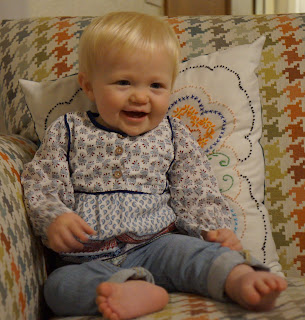 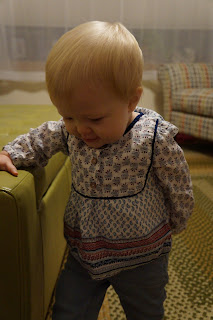 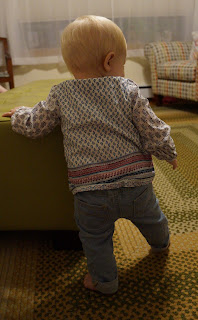 Happy Birthday Embry Elizabeth!
Emme loves anything crafty and is very creative. She loves to sing and dance. Emme is a great big sister. Emme loves school and loves to do math. We love you Emme! 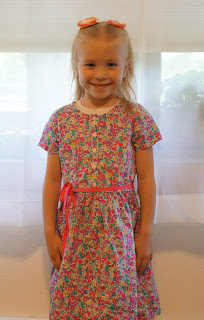 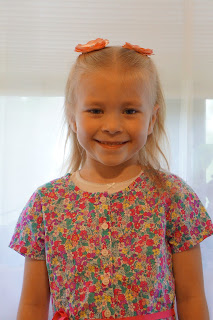 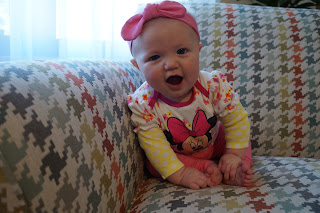 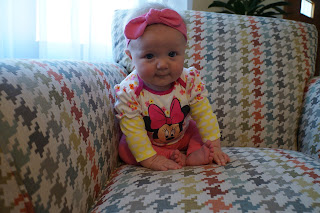 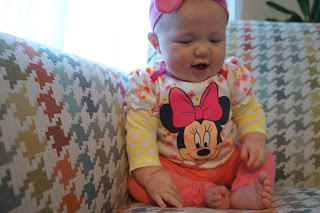 Lillian has found her voice this month! She also had found her feet, and she loves to suck on her toes. Lillian loves her brothers and sisters and is always excited when they play with her and give her loves. Lillian has also become very aware of Skeeter and she always tries to get a fistful of his hair anytime he is close enough. Skeeter thinks she is the most delicious and yummy smelling little person and always tries to steal licks when mommy is not looking. Lillian is happy! She is wonderfully content whether alone to play or with one or all of her siblings. She also does well with other people holding her, which is different from the other kids. She has decided that Daddy can be okay for short periods of time, especially now that Daddy is clean shaven:). 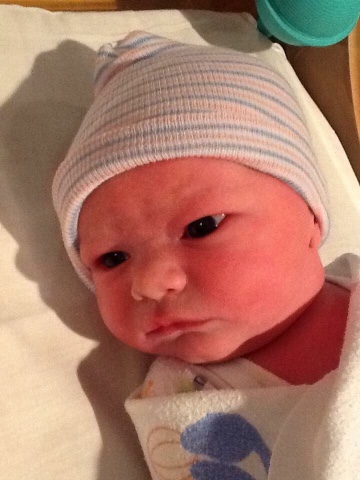 Four years ago, I met the most beautiful baby that I had ever seen. Those gorgeous, huge, blue eyes looked at me for the first time and my heart completely melted, I knew that Gideon would always be my Giddy. 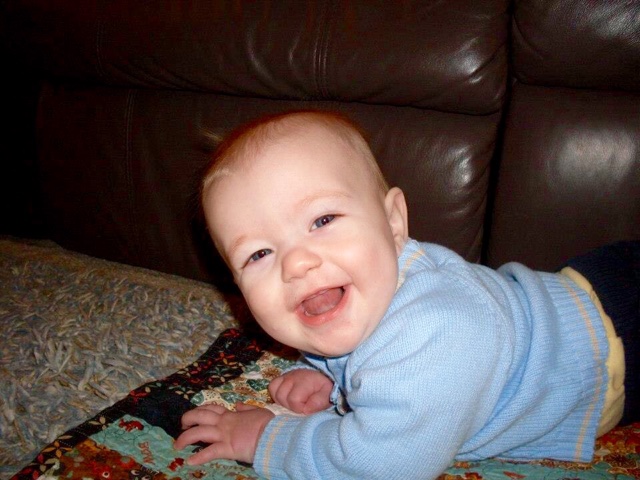 Gideon was the happiest baby. He hardly ever cried, and even when he did it was only for a minute or two. There was a moment, where Gideon gave a scare, but thankfully Gideon came out on top and thrived. He is a continual reminder to me of how much our Heavenly Father loves us and that angels really do exist. 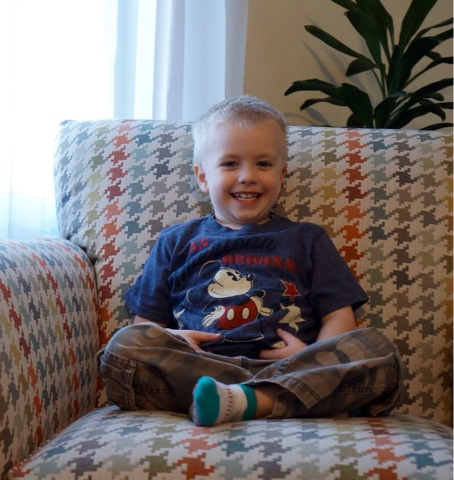 Giddy is the little sheriff in our family. He knows everybody's business! He is sweet and sensitive. And he gives the best hugs! I am so glad that as a family we have been blessed to spend every day for the last four years with him.
Posted by Liz at 9:13 AM 2 comments: 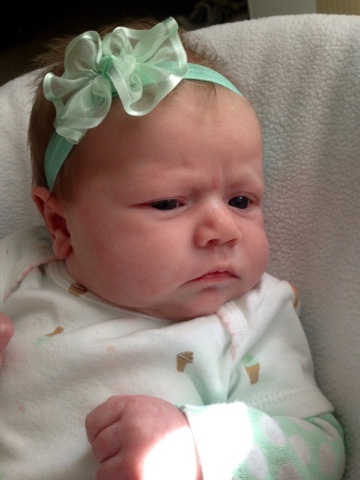 It is amazing to think that it has already been two years since we met Evelyn. She came into our family like a little whirlwind and none of us have been the same. 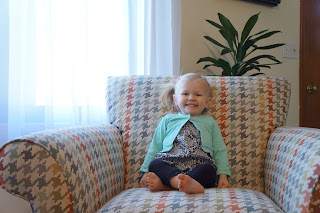 Ezzy is a sweet, spunky and fun little girl. She loves her older sister and brother and loves anytime she gets to play like big kids with them. She and Giddy are buddies and they get along pretty well during the day when the big kids are at school. Evelyn loves Lillian and gets very concerned when she cries. Ezzy is a true joy to be around and she always keeps things interesting. Love you Princess!